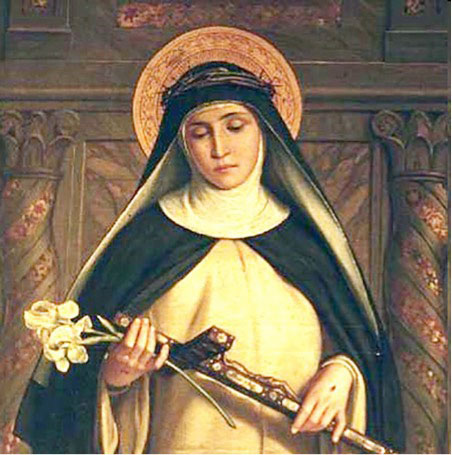 St. Catherine of Siena was born during the outbreak of the plague in Siena, Italy on March 25, 1347. She was the 25th child born to her mother, although half of her brothers and sisters did not survive childhood. Catherine herself was a twin, but her sister did not survive infancy. Her mother was 40 when she was born. Her father was a cloth dyer.

St. Catherine had a deep love for Christ from a young age, so much so that when her family tried to persuade her to get married at the age of 16 she went to lengths to oppose it, Her sister, Bonaventura had died, leaving her husband as a widower. Catherine’s parents proposed that he marry Catherine as a replacement, but Catherine did not want this. She began fasting and cut her hair short in protest.

Her family relented, allowing her to spend much of her time secluded in prayer in her bedroom. At the age of 18, she joined a religious order. Despite Catherine’s religious nature, she did not choose to enter a convent and instead she joined the Third Order of St. Dominic, which allowed her to be part of a religious society but she could live at home. The Dominican sisters taught St. Catherine how to read. Meanwhile, she lived quietly, isolated within her family home.

Gradually, her reputation for holiness and personal charisma attracted a circle of followers. From 1375 onward, she was employing scribes to help her write letters to many people who wanted her help. These people included kings, queens, and even the pope. She petitioned for peace and was instrumental in persuading the Pope in Avignon to return to Rome. She became involved in the politics of her time and brokered peace deals during a time of great conflict and war between the Italian city states.

Leaders turned to her for her advice and guidance, a role which led her to travel across Europe seeking reconciliation between warring parties. She urged Pope Gregory XI to return his administration to Rome and lobbied on behalf of the legitimacy of Pope Urban VI during the Great Schism of 1378.

She also established a monastery for women in 1377 outside of Siena. She wrote over 400 letters, instructions and prayers. These works are so influential that St. Catherine would later be declared a Doctor of the Church. She is one of the most influential and popular saints in the Church.

When she wasn’t resolving international crises, Catherine helped care for victims of the Black Plague in the city’s hospitals, caring for the worst patients and even burying those who had died. Today she is one of the patron saints of nurses.

By 1380, by the age of 33, Catherine had become ill, possibly because of her habit of extreme fasting. Her confessor, Raymond, ordered her to eat, but she replied that she found it difficult to do so, and that possibly she was ill. In January of 1380, her illness accelerated her inability to eat and drink. Within weeks, she was unable to use her legs. She died on April 29, following a stroke just a week prior.

God of Wisdom you made our sister Catherine burn with divine love in contemplating the Lord’s passion and in serving your Church. With the help of her prayers may your people, united in the mystery of Christ, rejoice forever in the revelation of his glory, who lives and reigns with you and the Holy Spirit, God, for ever and ever.
Amen.

St Catherine wrote letters to all sorts of people in a time when video calling and Zoom didn’t exist. This week you might like to write a letter to a family member or friend. You can tell them what you have learned about St Catherine this week, draw a picture of her, or, you might just like to write and ask how they are, You never know, you might get a letter back.

Many people celebrate Saint Catherine of Siena’s feast day with a traditional pastry from Siena.  Cavallucci di Siena is a type of biscuit which has been baked and given as gifts in Siena since the 16th century. You could have a go at making some biscuits or cakes to celebrate too.
Here is an easy biscuit recipe you might like to try.
https://www.cookingwithmykids.co.uk/fork-biscuits/