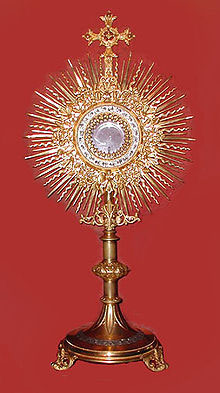 What We Are Celebrating

On the Thursday or Sunday after Trinity Sunday, the Church celebrates The Feast of Corpus Christi, also known as The Solemnity of the Most Holy Body and Blood of Christ. Processions often take place in churches around the world. The ‘body of Christ’ is carried out of the church and into the public for people to see in a monstrance, like the one pictured below. The Feast commemorates the immense gift of the Eucharist in our lives and it affirms the belief that we have in the transubstantiation.

Transubstantiation is the belief that the bread and wine is transformed into the body and blood of Christ during the Eucharist. The festival also celebrates the belief that Jesus sacrificed his life to save the world.

In Latin, Corpus Christi means Body of Christ. On Holy Thursday, we remember the institution of the priesthood and the Eucharist, the Last Supper, the Agony in the Garden, the betrayal of Judas and the beginning of the Passion of Christ. It is easy to become lost in so many beautiful things to remember. Corpus Christi Sunday allows us to focus solely on celebrating the real presence of Christ – Body, Blood, Soul, and Divinity – in the bread and wine.

The origins of the Feast of Corpus Christi date back to the Middle Ages!

In 1263, a German priest by the name of Father Peter, stopped to celebrate Mass in Bolsena, Italy while he was on his way to Rome for a pilgrimage. Father Peter was having doubts at the time as to whether the Eucharist was truly the Body and Blood of Christ. However, as he celebrated Mass, when he prayed the prayer of Consecration, blood emerged from the consecrated host, spilling onto the altar.
Father Peter reported the miracle to Pope Urban IV, who sent delegates to investigate the miracle. Today, the Cathedral of Orvieto, Italy, is the resting place of the relics from this Eucharistic miracle.

The message of Sister Juliana and the Eucharistic Miracle in Bolsena, greatly affected Pope Urban IV. In 1264, through a papal bill called Transiturus de hoc mundo, Pope Urban IV instituted the Solemnity of Corpus Christi on the Thursday after Pentecost. Under Pope Clement V, Corpus Christi became a universal Feast. However, under Pope John XXII, devotion to the Holy Eucharist spread widely.

Dear Lord Jesus Christ, we thank You for the gift of Your Holy Body and Blood through which we get strengthened body, soul and mind. We solemnly pledge that we will offer You our undivided love and also service to our brothers and sisters as it is Your Holy will. We pray this in the Name of the Father, and the Son and the Holy Spirit. Amen

If you look online you will be able to see lots of different styles of Monstrance, could you design your own?
I would love to see your creations.